More than 30 years, living 4-hour drive from Zagreb and I’ve never visited Zagreb. It’s actually pretty cool living in Europe. Everything is so close, you can take a few hours drive and end up in a different country.

What I didn’t expect of Zagreb?

A few people told me that Zagreb is pretty small and that there isn’t much to do. That’s why I didn’t have many expectations. But during my stay in Zagreb, I convinced myself otherwise and I loved everything about the city.

The person who drove this 4-hour “long” drive was me. For me, everything longer than one hour is a long drive. So when we got here in the evening, we went for a drink. I was so tired that I almost fell asleep sitting in a chair 🙂

Is divided into two sections: Gornji Grad and Donji Grad (it translates to Upper Town and Lower Town).

Donji Grad is pretty much a modern area. When people here say “the city center” they think of this part.

Gornji Grad is the upper part of the city (city up the hill), it is a place with a number of historic sites and tourist attractions like St. Mark’s Church, Zagreb’s Cathedral and parliament building.

Generally, it’s perfect for a walk, just wandering around, and then sit back and relax with a glass of vine.

Once a bomb shelter, built during World War Two, it now has a totally different purpose: a tourist attraction and a museum. It’s located in the city center.

Imagine, first you are drinking a coffee sitting in a café in the city center, and in the next moment you can be in a bomb shelter tunnel.

Wandering here maybe looks a bit scary, but it isn’t, it’s quite fun😊

This historic cable lift brings you to the upper part of the old town. With its 66-meter-long track, is one of the shortest public transports in the world. It started working in 1890, and now it stands as a monument of culture and a tourist attraction.

It was really crowdy when we got there and there was a big line for the tickets. But it rides every 10 minutes, so we didn’t wait long.

You shouldn’t miss it. Especially when you get to the top, and get such a great view of the city.

When you get to the upper city, the thing you can’t miss is Saint Mark’s church. It’s a Roman Catholic church built in the 13th century.

It’s recognizable by its colorful tiled roof. With the medieval coat of arms of Croatia, Slavonia and Dalmatia on the left side of the roof, and the emblem of Zagreb on the right.

It’s one of the Zagreb’s iconic places.

This medieval gate, built in 13th century, is one of the symbols of the city and one of the best-preserved monuments in Zagreb.

These Gates miraculously survived a great fire in 1731, which burned everything else to the ground. At the time of the fire Gates were displaying a painting of the Mother of God, which survived the fire too.

After the fire, to commemorate the event, a small chapel has been built. The chapel holds the picture of the Mother of God, according to a picture that survived the fire, and today is considered as a protector of the city. Today many people still stop here to pray and light a candle.

At the Kaptol square there’s a Zagreb ’s Cathedral which has been there since 11th century. First it was known as St. Stephen’s Cathedral, and now, the Cathedral of the Assumption of the Blessed Virgin Mary.

This isn’t the original look from the 11th century cause it was damaged in 13th century due to fire, Tatar attack and an earthquake.

This cathedral with its two spears is the highest building in Zagreb, and also in entire Croatia. One of the two spears was damaged in the earthquake in March 2020.

I recommend you get inside, wander around and take a few shots.

This beautiful building is an art gallery with over 120 exhibits per year. We didn’t get in, just admired it from the outside.

We even saw one couple taking wedding pictures in front of the building. If you look closely, you will even see the bride 🙂

Zagreb is very much alive at night. You can choose whether to go for a quiet dinner with a tasty wine, or go clubbing later at night.

The thing I didn’t know is that they love Serbian folk music (they call them “Cajke”). So we went clubbing with Serbian music, and had a great time. This picture stands askew cause the drunk person took it. It wasn’t me 😀

Overall, Zagreb is a great place to visit. 2 nights were just enough to see everything we wanted. 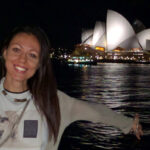 Previous Story:
One week in Sydney – What to do?