This was actually the easiest trip arrangement ever. Four of us just sat for a coffee and decided to buy tickets and travel to Bangkok within a month. Believe it or not, before Thailand the furthest trip for me was a 4 hour flight.

And the time for Thailand finally came. The flight was very long. We had one stop in Doha Qatar. The stop was supposed to be 9 hours but the flight was delayed for 4 more hours. You can imagine my face when I woke up at 6 a.m. after a few hour of sleep on an airport chair, and saw a flight screen. Really wasn’t sure should I scream or cry. In Doha, the temperature was above 30°C, but at the airport, it was around 18°C, so I managed to get a cold (yeey).

After 23 hour of torture, we managed to get to our hotel in Bangkok. Since we were all excited we wanted to go out at 2 a.m. First impression was bad smell and cockroaches. But we were all so tired, It would be a miracle to be in positive mood. 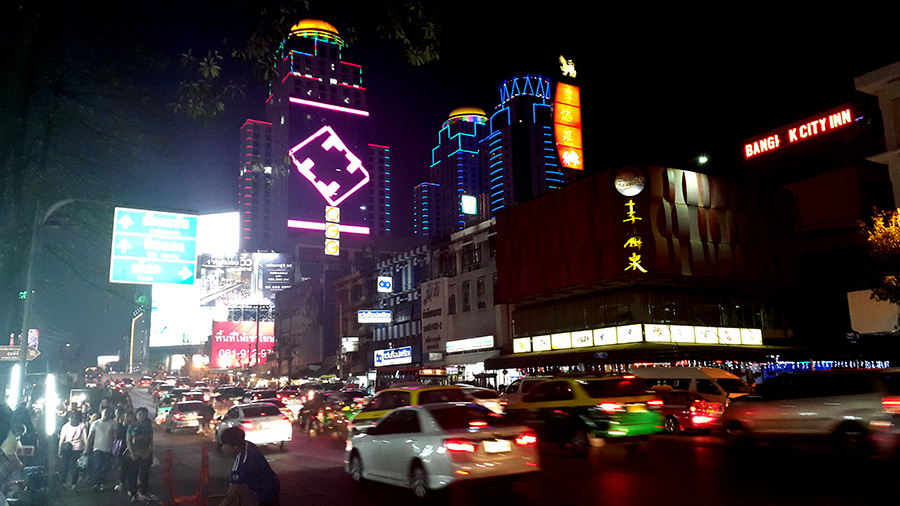 Finally we got some sleep and tomorrow morning everything looked so interesting and beautiful. I’ve heard so much about Thailand and Bangkok, but you couldn’t imagine it for real. 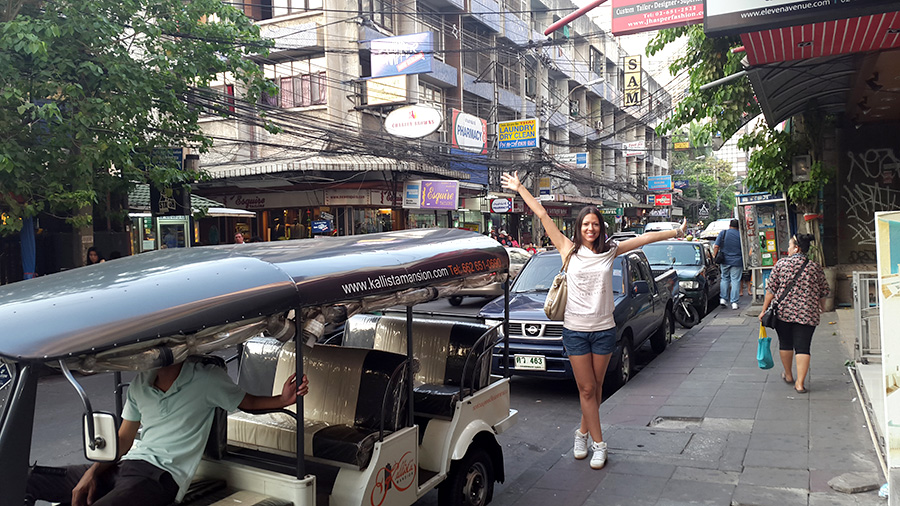 First we had to try fruit from the street, everything looked so delicious (mango, papaya, dragon fruit). Mango was so delicious, so we eat tons of it every day. Second, we had to eat some real food. We were told that we should find a place which was full of domestic people, and eat there. So we listened to the advice and it really paid off. In Europe we would never sit to eat in a place like this. It was a restaurant on the street next to the pedestrian path. 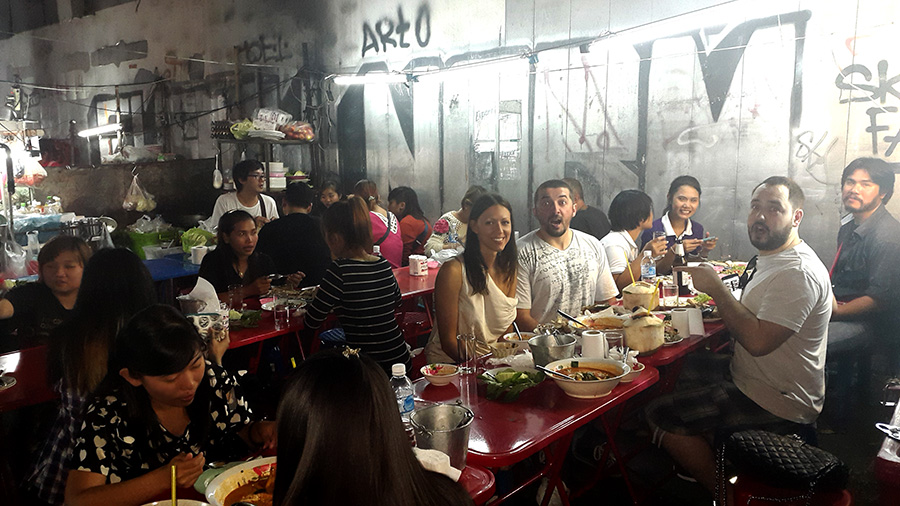 Food was cooked on the street as well.  We ate Tom Yum soup, their national meal and all kinds of sea food. Food was so delicious, and really cheap. 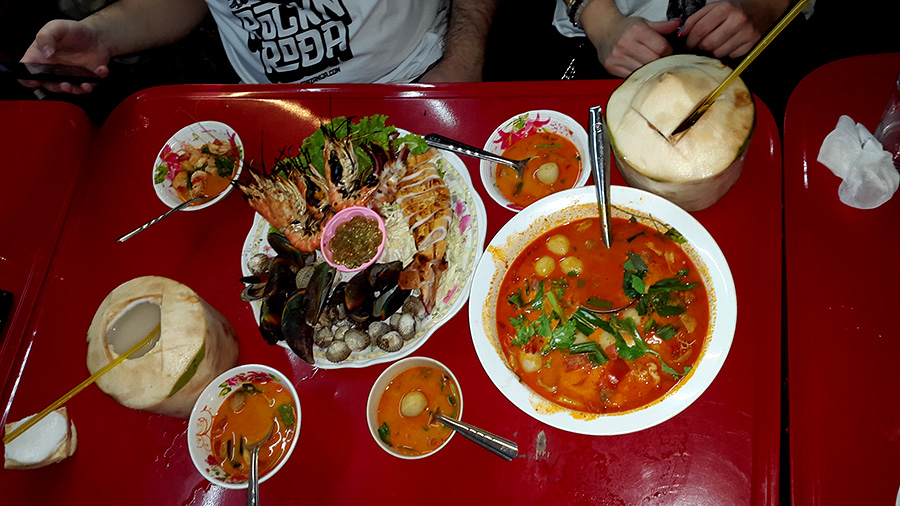 Next thing that we had on our to do list that day was Tuk tuk. It’s something like a motorcycle with a big cabin. It has so many different lights so it really looks like something that ran out of an amusement park. 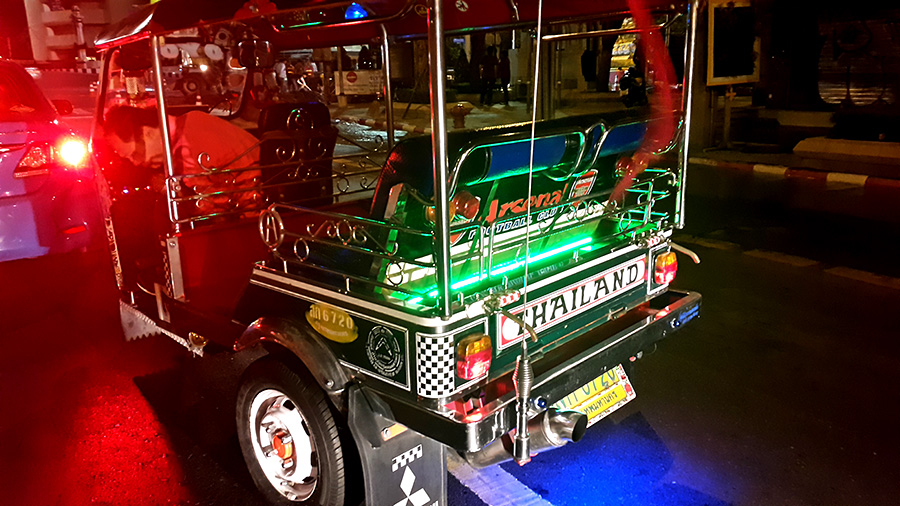 Four of us and the driver managed to ride in that thing. Tuk tuk drivers try to rip tourists off, so it’s a plus if you know how to bargain. We weren’t very good at it, but it was worth it!

Sky Bars in Bangkok have unbelievable views, so we tried to visit Lebua Sky Bar, but at the entrance they told us that men must wear long trousers and women a dress to get in. The thing that was interesting is that an old lady was selling trousers in front of the entrance. We decided to get back to the hotel and get dressed properly.  And so we did. 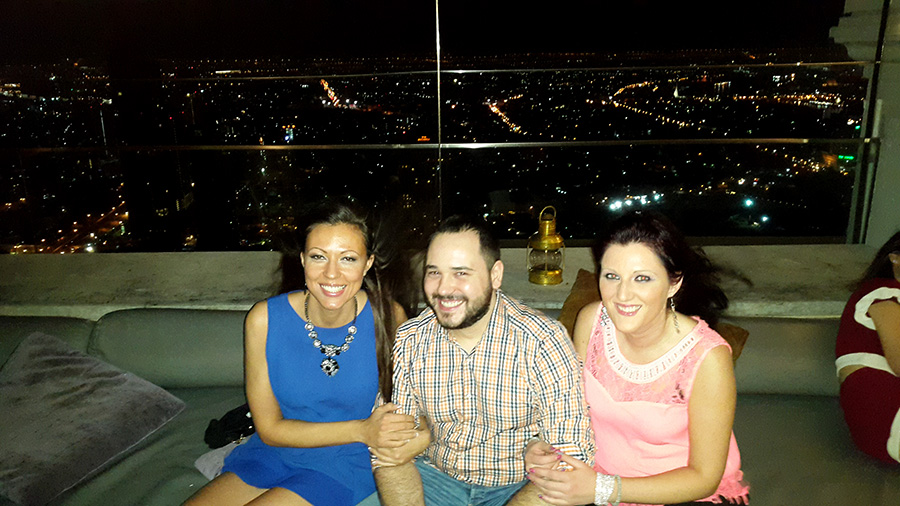 This was the second time that I thought: It was worth it. The view is amassing. 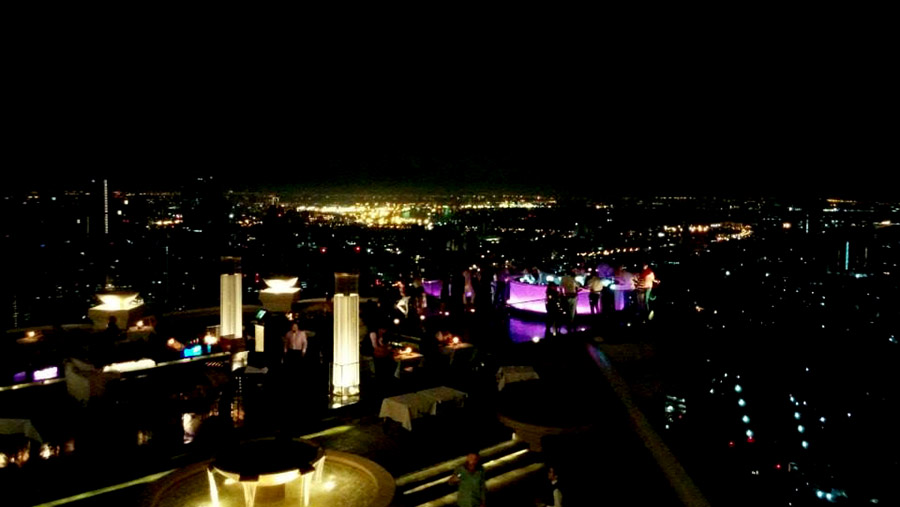 The drink price is a bit expensive, but… It was totally worth it!

The next day we thought of going to the Grand Palace. After a big hangover, we finally woke up and went. If you think it’s just one more palace, you are wrong. It’s a place with lots of chapels, templates and royal facilities. Traffic in Bangkok is so crowded during the day so it took us almost an hour to get there. Working hours of the Palace are from 8 a.m. to 3:30 p.m. but we’ve managed to get in at 3:28. But when we bought tickets, we could stay for one more hour. Luckily this time we googled  for required clothing, so  we were dressed properly this time. It’s a temple, so you need to be covered. When we finally got in, I was amassed. 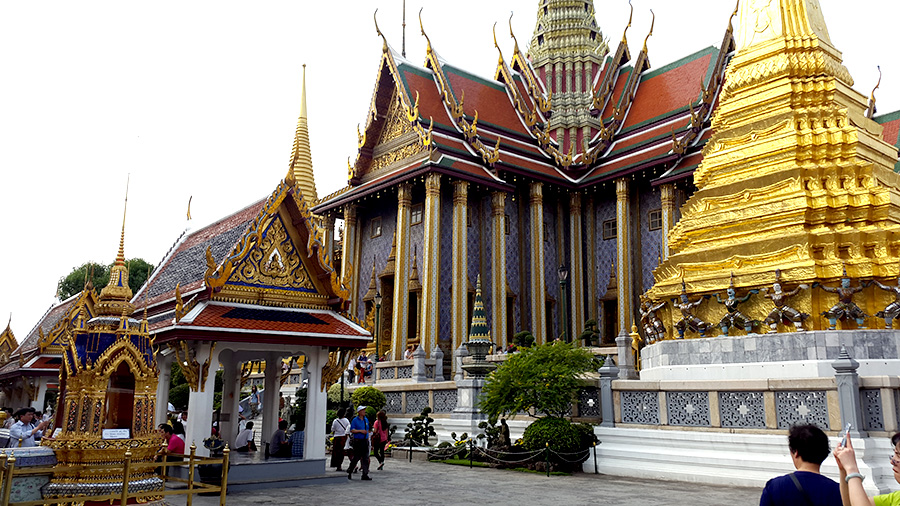 It really looked like I’m in some fairy tale, and I really don’t get amazed easily. Everywhere you look, you can see more and more golden temples. 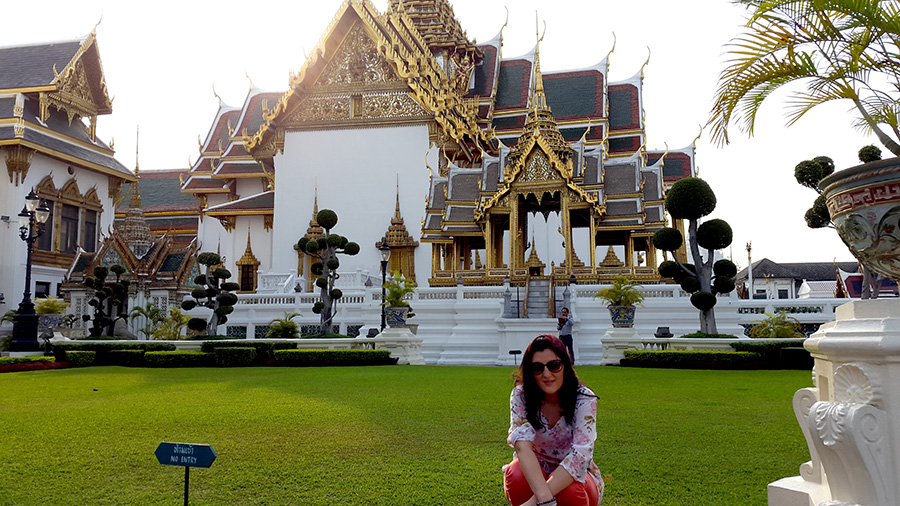 Something you see only on TV.

After the Grand Palace we tried to get to the What Arun temple. This time we didn’t succeeded. This temple was across the river and we couldn’t find a way to cross the river. We even got on a ride with a tuk tuk which drove us to some people who tried to sell us a boat ride on a river. Believe it or not, the same thing happened a day before, so we decided to get to the hotel and get rest for a night out. In the meantime we bought some fruit called Dorian. I’ve watched some clip on YouTube where the guy from the video was saying how Dorian was the best fruit he had ever eaten. That fruit actually was like eating onion pudding. Why would somebody wanted to eat onion pudding? As we bought it on our way to the hotel, we brought it to our hotel room. After a few days we saw a sign that actually said that it’s forbidden to get Dorian fruit to the room.

The best place for tourist to have a night out is Khao San Road. Beside alcohol, you can buy food as well. But not any food, street food. 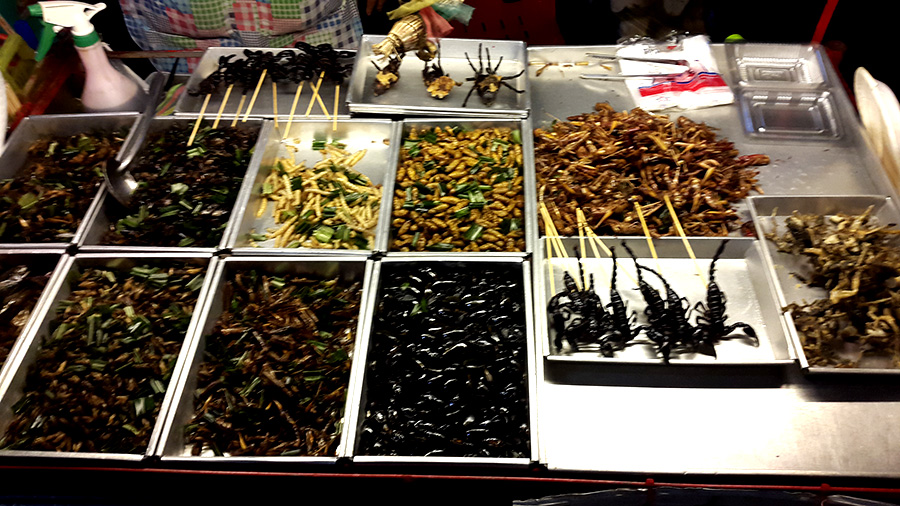 At first, that street food looks like “I would rather die than eat something like that”. But after a while, you get used to it. We tried some meat on a stick (have absolutely no idea what kind of meat that was).  We also ate Pad Thai (fried rice noodles with sweet sauce) . What was the most interesting thing we ate? We even tried fried scorpion. It was a dare, but I did it! 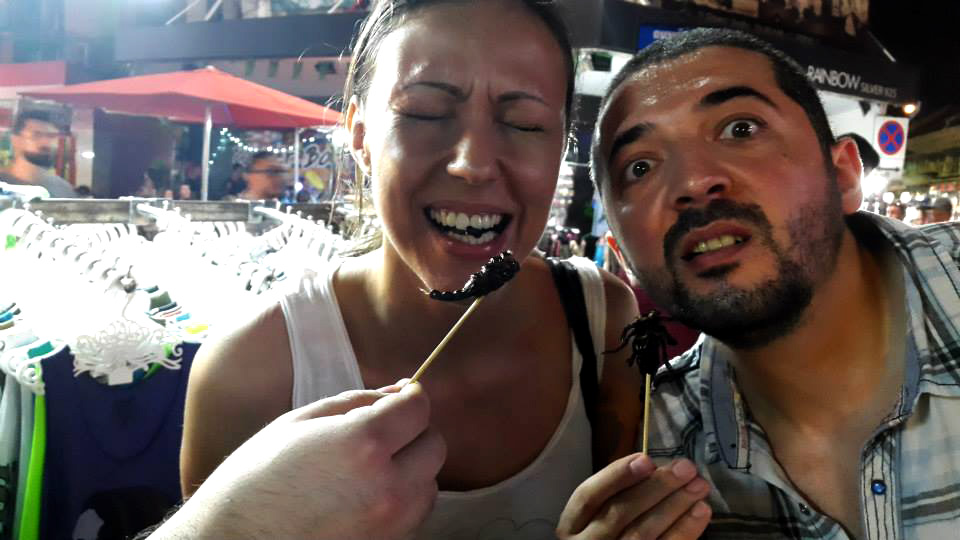 And the most important thing in Khao San Road is alcohol. People usually drink bear or cocktails. I’m not a beer fan, but I had to try their beer. The most common is Chang and Singha (there is also a Tiger, but it’s less popular than these two). This was the first time in my life that I got drunk on a beer. At midnight police came with cars, music was off, chairs were put on the table. But as soon as police went, everything got the way it was 5 minutes ago, so we continued drinking. 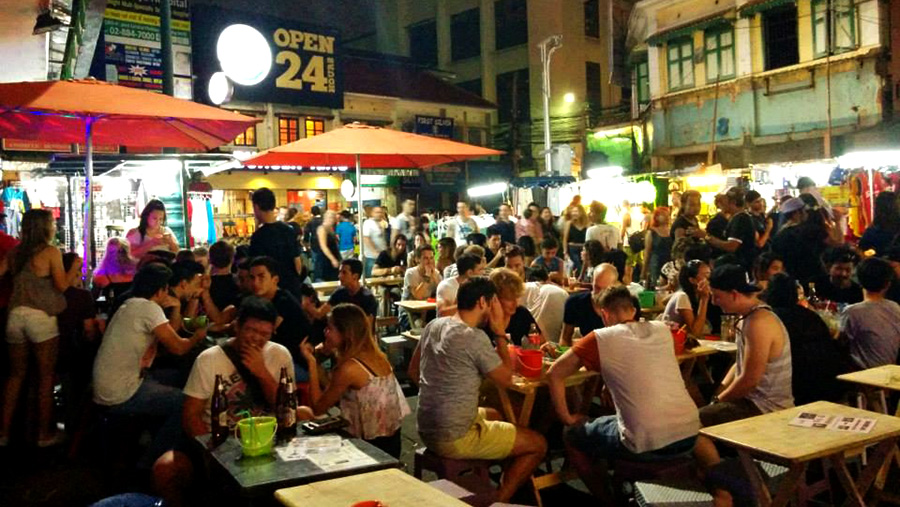 That night two things happened that I won’t ever forget. First was scary as hell. I’m a girl, and like most of girls, I’m afraid of cockroaches. In Thailand cockroaches are bigger than in Europe, and guess what? They can fly too! So one cockroach was walking towards our table and suddenly started to fly! The rest of the night I got my cockroach sensor on. But beer helped with the fear and memory loss. The second thing was a comedy. When I asked a waiter where the toilet is, he told me to go to some dark passage, and I went, but got my friend with me to toss her if something scary came up, so I would have more time to run. Nothing happened, we just saw a rat on our way to the toilet. But the whole impression was so unbelievable that I had to convince them all to go. At the end of that passage, there is actually a toilet. Entrance is paid 20bht. When you get in, you can see “internet cafe” with 3 computers. It’s like you’ve made internet cafe in the bathroom. Then, when you get behind, you get  to the toilet. But that is not just a toilet, you can also have a bath if you wish. And the way you flush the water is by pouring water into a plastic bucket, and you know the rest.

The best is to finish the night by going to Thai massage. I liked the foot massage the most. When I think of it now, I could fly to Bangkok just to get that massage. And it was cheep of course.

The next day we went to a Floating market outside of Bangkok. It was really a fun thing to see. You float on the boat with vendors catching your boat with big hooks. 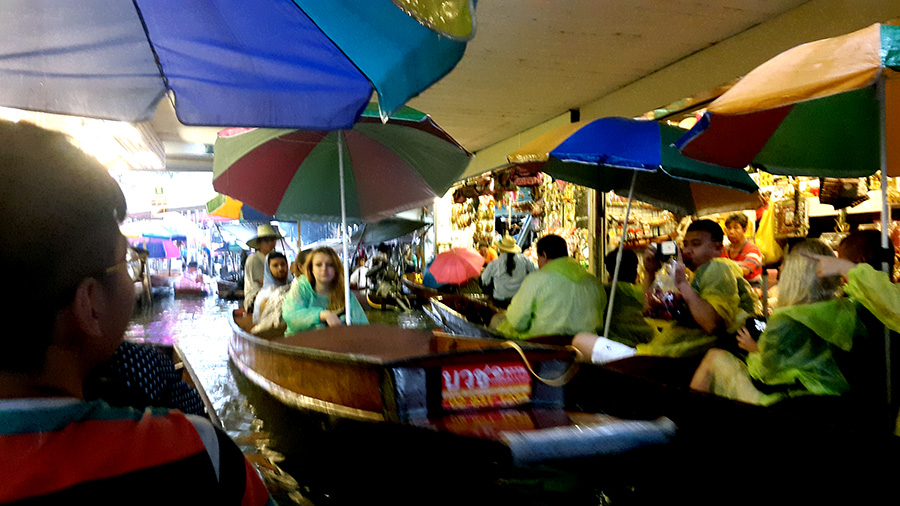 You could buy some interesting stuff there, mainly souvenirs. You can see some snakes in the water, but luckily you are in the boat drinking coconut milk. 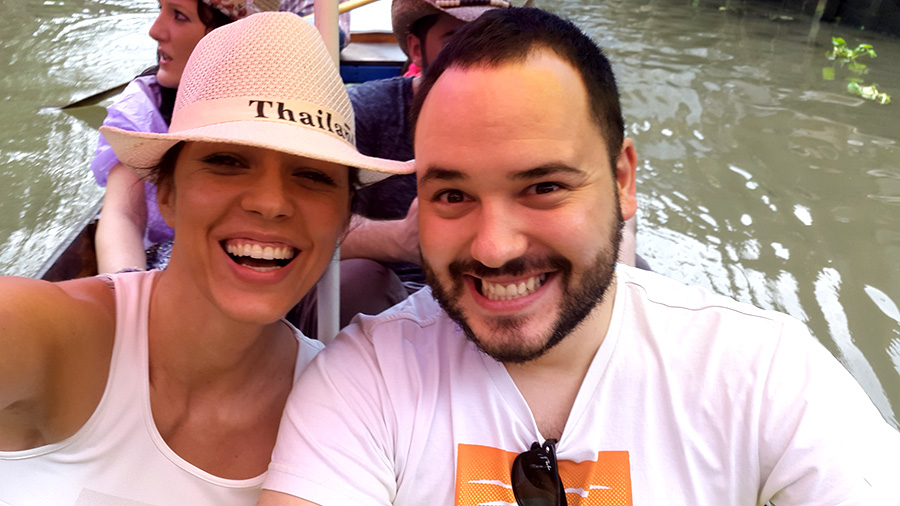 And of course, we had to see the Bangla road. It’s something that you have to see with your own eyes. It’s a street with night clubs filled with lady’s who have numbers on,  so you can easily pick one. So this is usually the place where tourist guys come to have fun with Thai girls.

Because we had seen everything on our to do list, the rest of the days we just spent eating, drinking and getting massages until we flew to Kho Phangan. 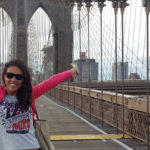