When I think about my trip to NYC, I would have to divide it into 2 different parts. Of course, when you come to NYC you have that make a to-do list which is more like a “do or don’t come home”  list. And when you finish that list, then you really have time to relax and enjoy NYC.

We had landed somewhere in the afternoon, but flight duration and waiting at the airport made our big wishes into “I just want to take a bath and get some sleep”.

When you travel from Europe, you have that 8 hour difference and you will probably wake up at 4 am like we did.

The first thing that I wanted to do is to find a place for breakfast. We found a nice place on Broadway street. I was so hungry I could die. But try to order eggs! First you got the question “What kind of eggs?”. Since I am not a native English speaker, thank God I knew what scrambled eggs are. Then, there is a second question, third, fourth… You have to choose what do you want beside eggs, what kind of bread, do you want coffee, what kind of coffee. I must say it was like I’m in some sort of quiz. Then there is that tipping part. We have heard tipping in USA is a must, and it’s usually 20%. So we managed to order and pay for food without looking weird, yay 🙂

Actually we weren’t supposed to do all that in one day but NYC is so amazing, just makes you want to see more and more. Let me be honest, some things were just along the way 🙂

For us, the best way to travel through NYC was metro. 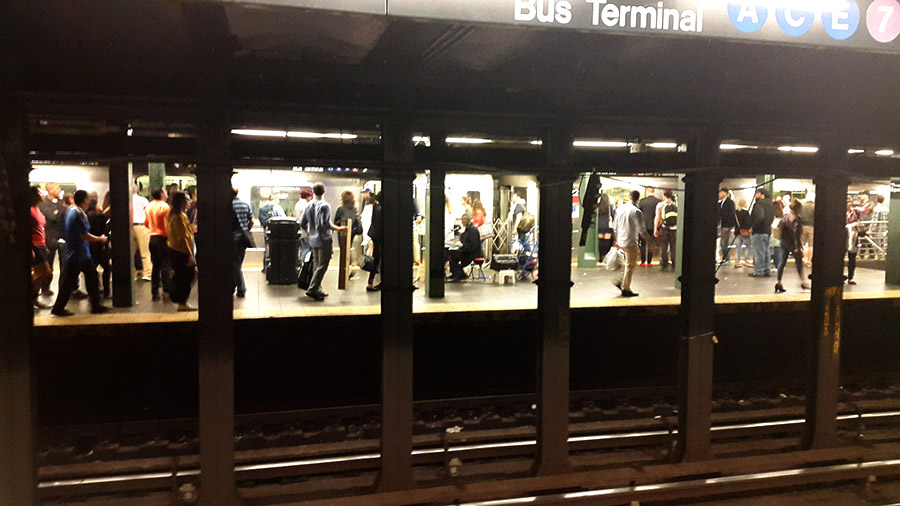 Central Park was nearby. We are not such nature lovers, but it was nice to see so much green in the middle of the city. Lots of squirrels and free Wi-Fi was a plus. 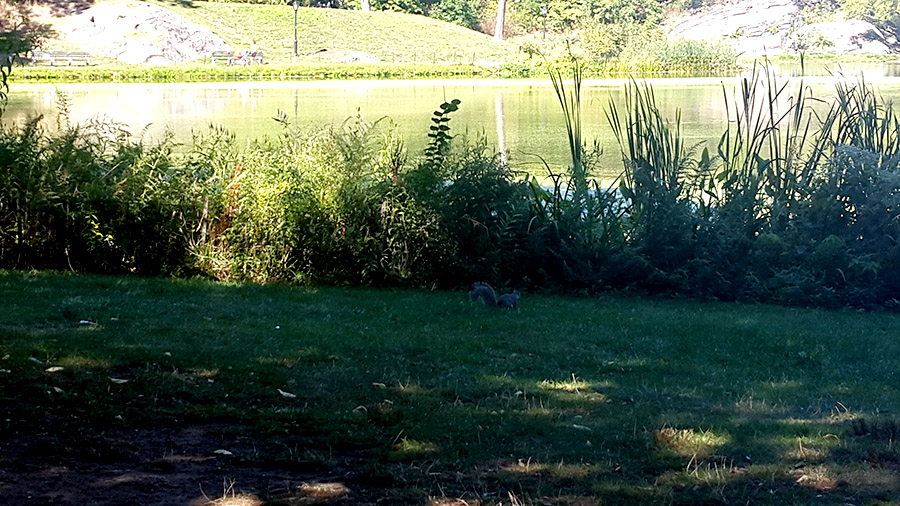 Time Square was our primary target, but along the way we managed to end up in Grand Central Station and the interior really wowed me. Reminded me of London. 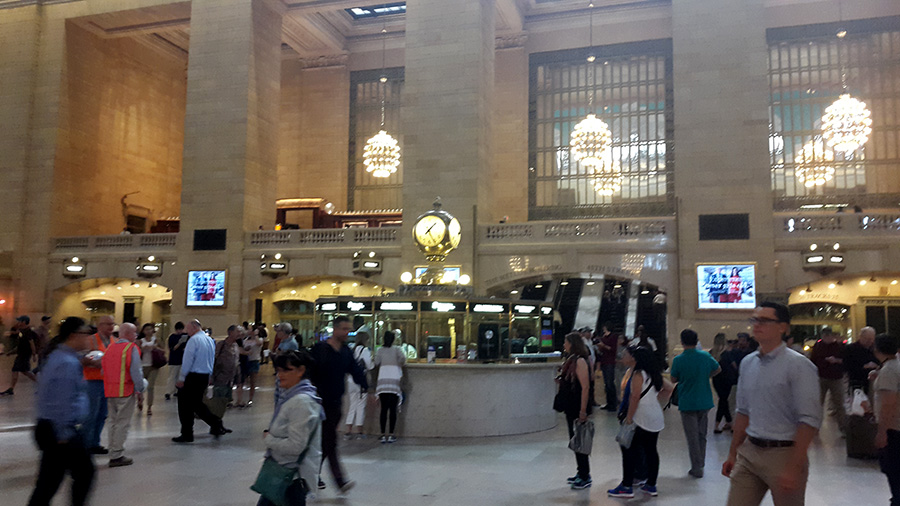 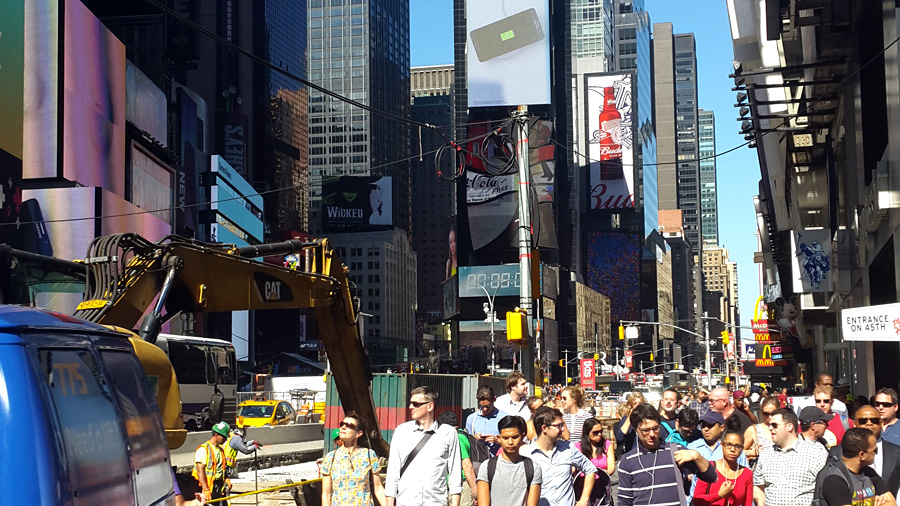 It’s awesome how lively Times Square is and full of all kinds of attractions in one place. 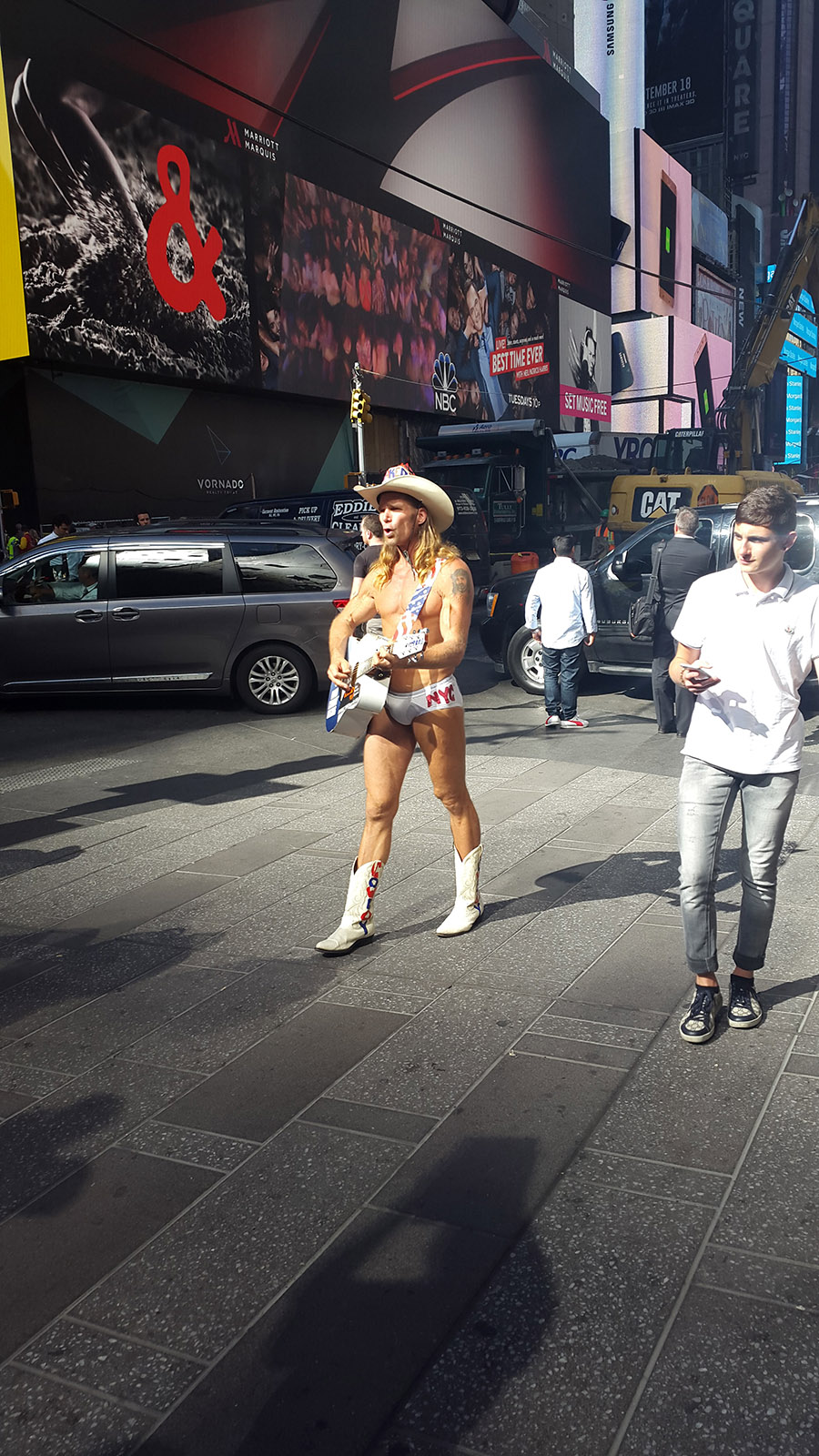 We made tons of pictures and bought 2 day tickets to hop off – hop on bus, and got some free tickets for a boat ride to Liberty island and a bike ride through Central park. It was funny how you can pay with credit card in the middle of the street.

We got hungry and thought – what could be a more perfect place than Little Italy. So Little Italy it is. Along the way, we pass through China Town. 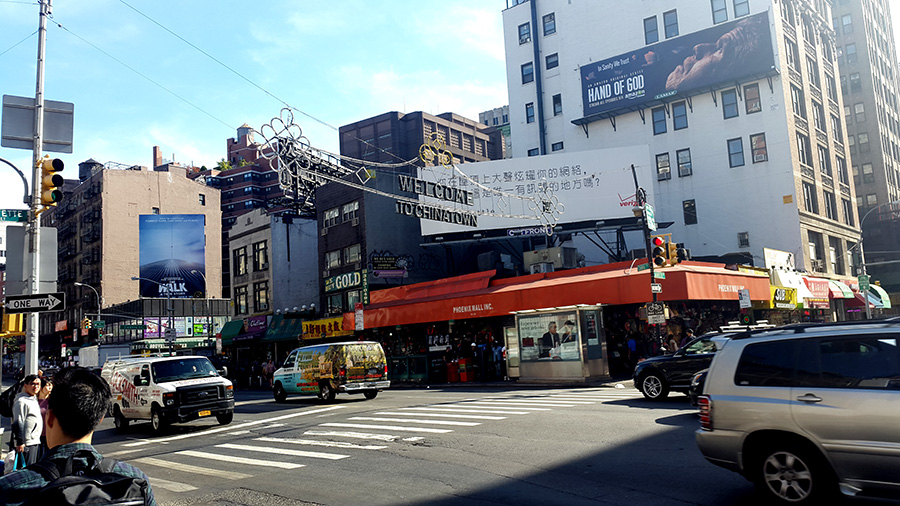 Such a busy part of the town. In that moment, Little Italy was the place we were looking for: peaceful, beautiful scenery, great wine and tasty food. And all that combined with sunny worm day. 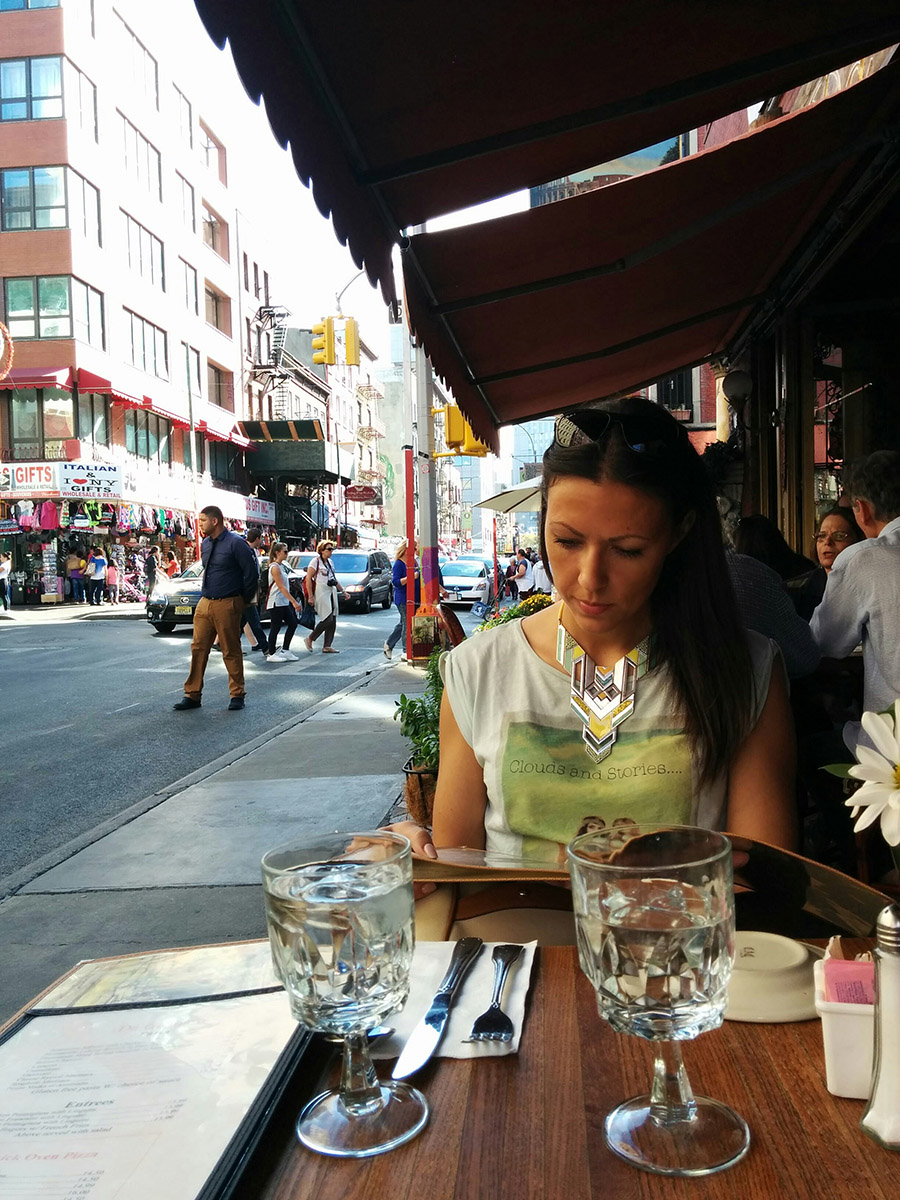 If I could I would teleport myself in that exact moment right now.

On our way back, we saw the Empire State building. Thought we will just take a few photos but we actually bought tickets to get in. I’ve watched a lot of videos telling me not go to the Empire State building because you will pay $32.00 to spend most of the day waiting in a queue. But you could actually buy VIP ticket that allows you to skip lines. It cost more but it was worth it. 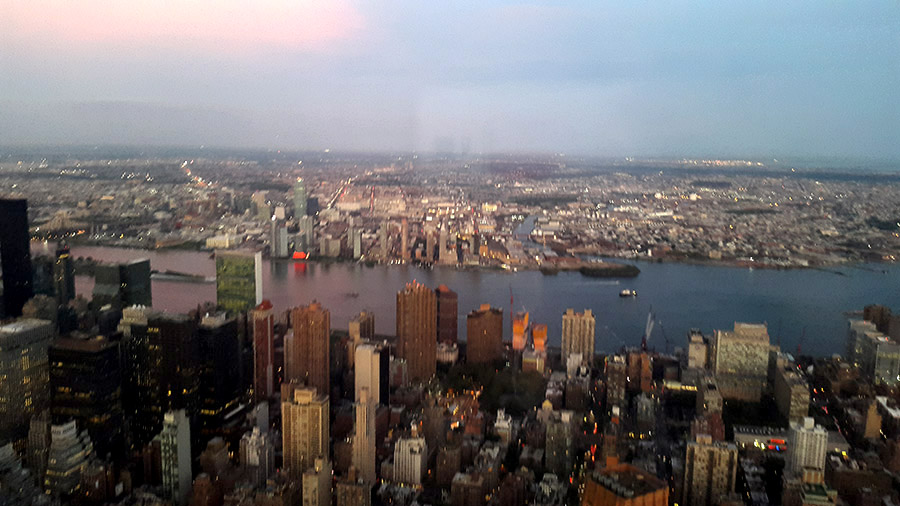 Great thing was that we hit the right time so we saw NYC by day and by night. It was beautiful view from 86th and 102nd floor. 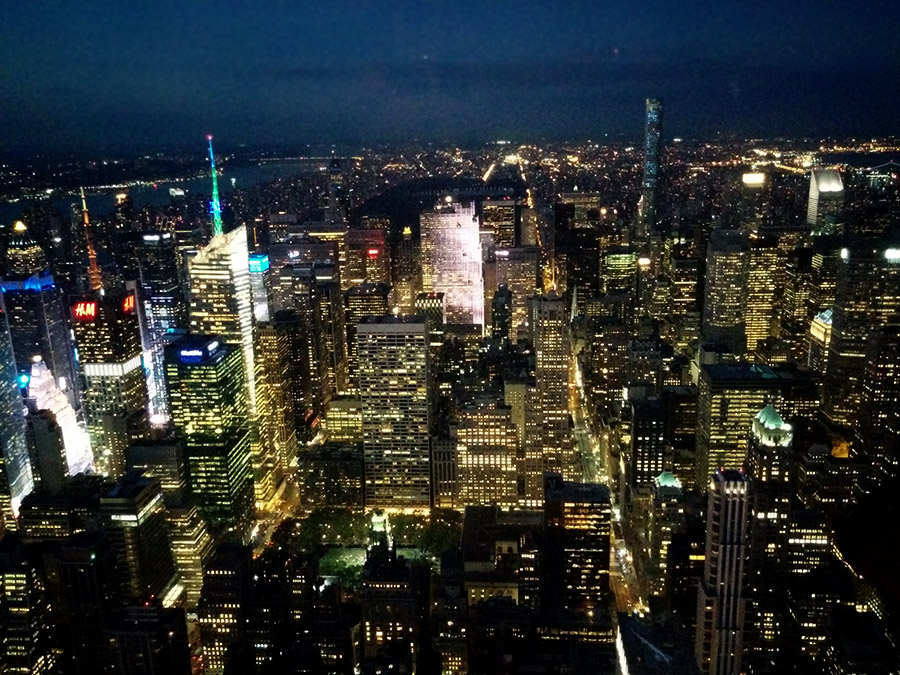 I had to climb till the 102th floor so I could realize, I had The Eight Wonder of the World with me all day long! 😀 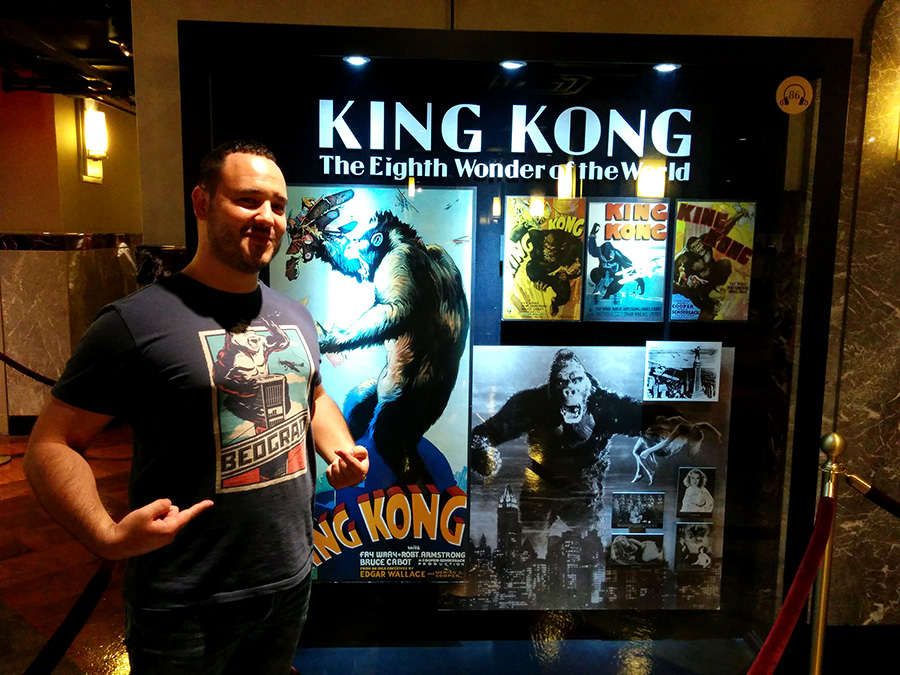 As we bought tickets for hop off – hop on bus, we wanted to spend our day on the bus. 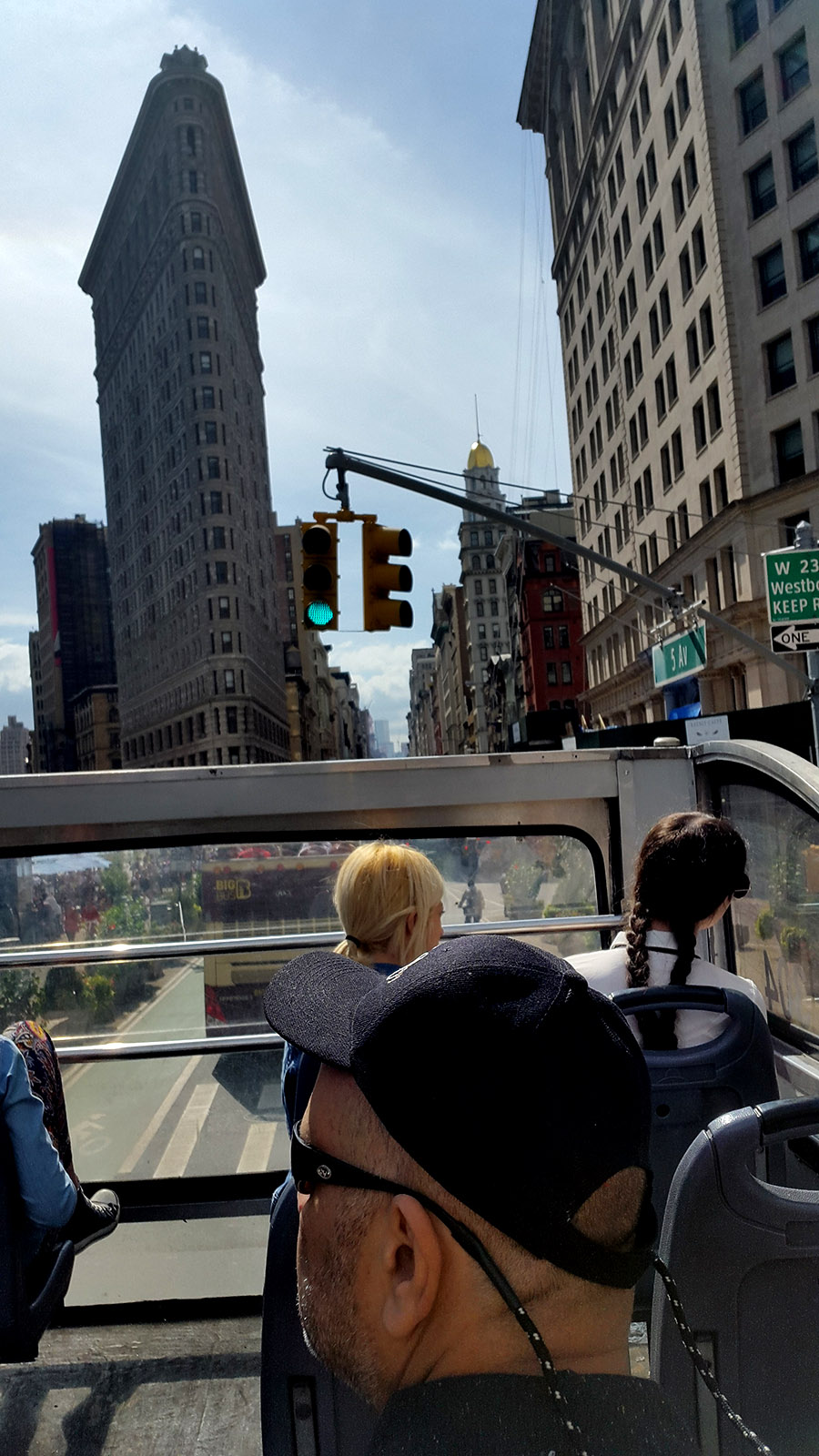 We rode one ride and realized that our 2 day tickets were actually 24 hour tickets with time ticking from the moment we bought the tickets. We just ate some pizza and got a ride to Times Square pretending our tickets are still valid. Well, if we hadn’t bought tickets that day, we would probably never have bought them and wouldn’t have spent these 2 hours just driving and enjoying the view. 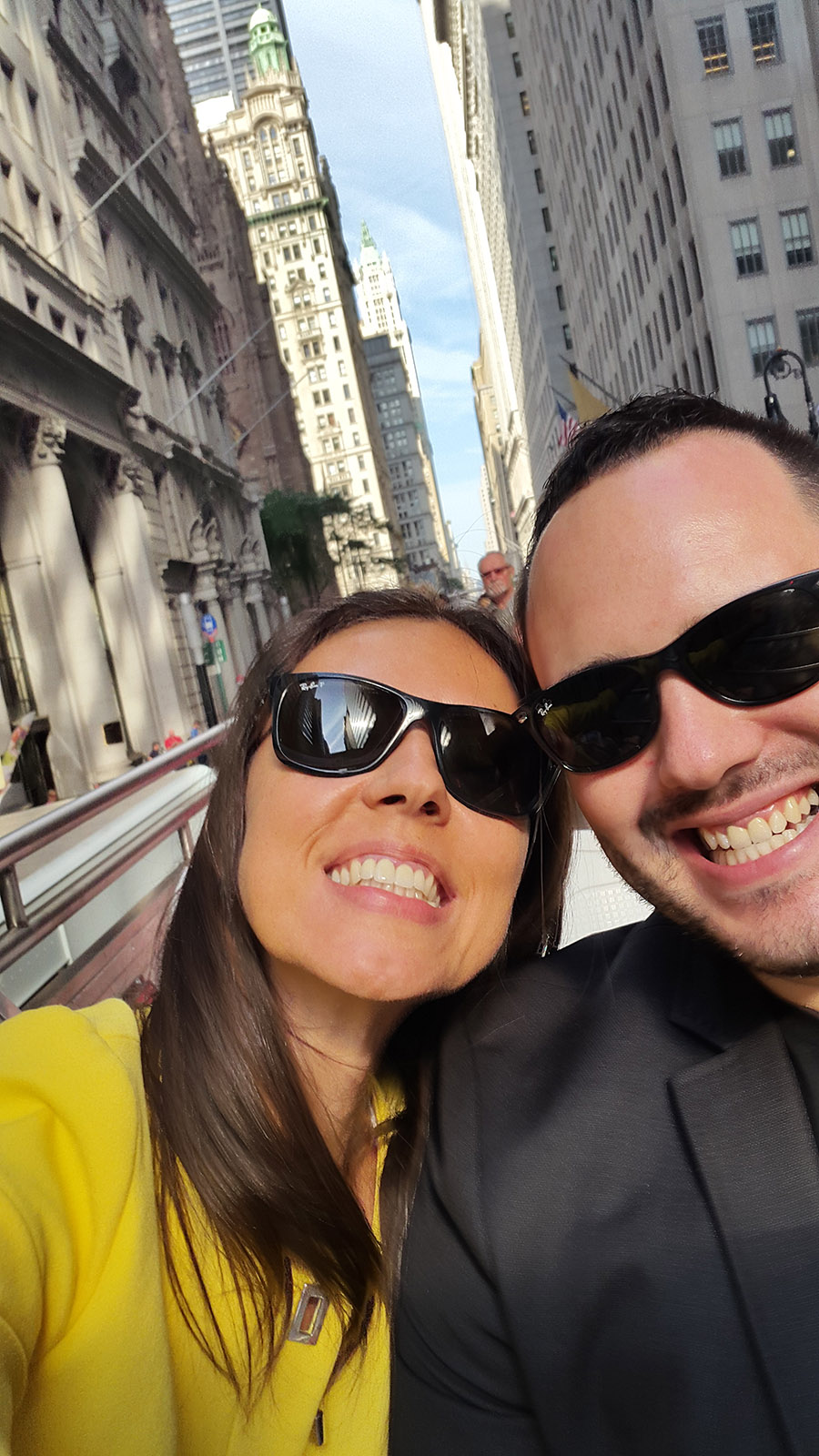 So we had short but nice time. The other funny thing was, ticket for Liberty island was not really ticket to the island, it was just a ticket around the island, and this ferry ride is actually free. But we didn’t let this spoil our mood, we did eat awesome pizza (They have so many pica flavors. Haven’t seen this anywhere really) and were on our way to meet with our friend who lives in NYC.

He showed us a bit around Times Square and led us to the best part of New York City – Hell’s Kitchen. 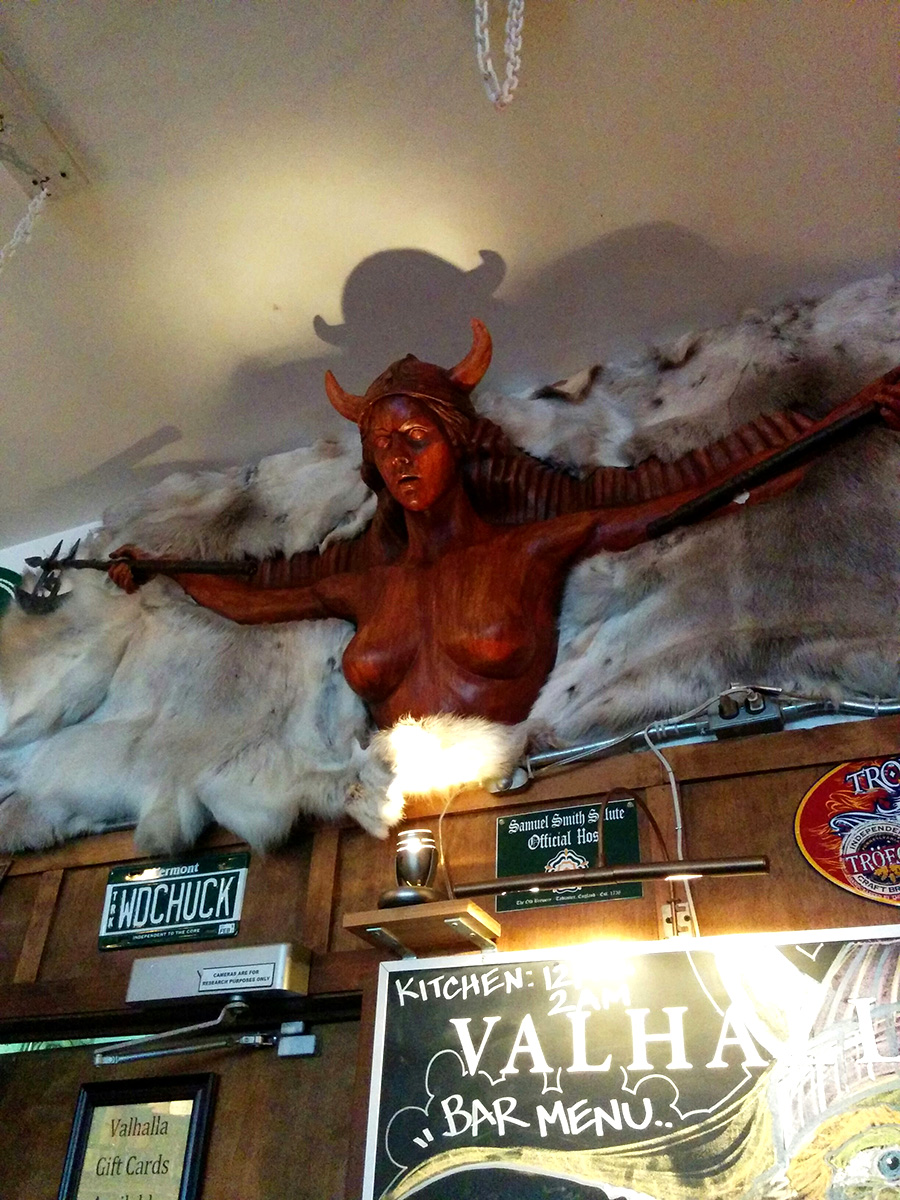 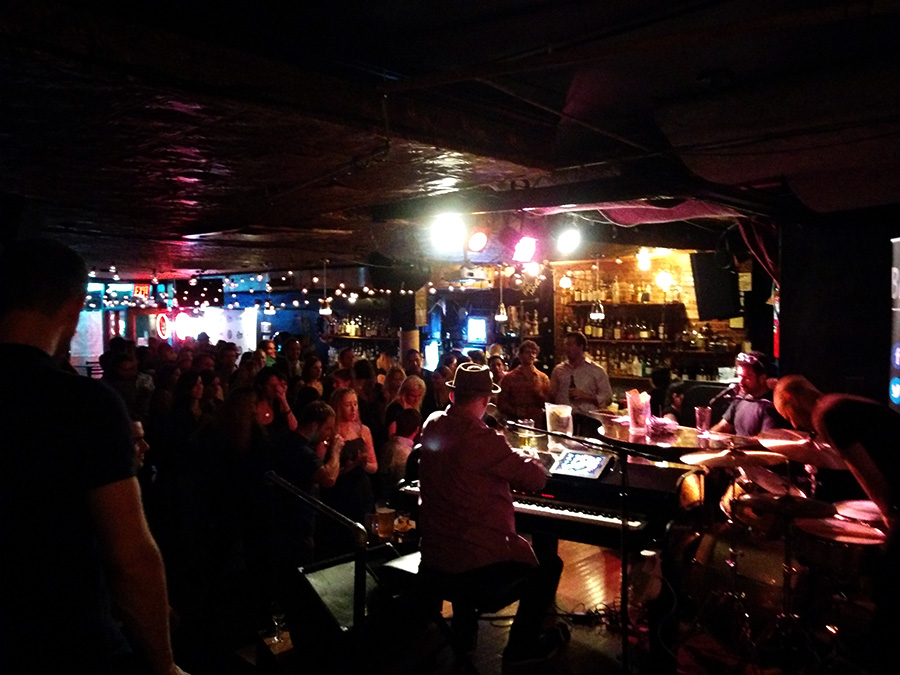 We actually stayed till 2 a.m. Oh, and one more thing, we have bought tickets to tomorrows Yankees baseball game!

Bagels and Yankee stadium. I wondered what is all the fuss with bagels. In our building there was one bagel shop with endless line in front of the store. This morning I decided to try. Actually, the line goes really fast, so I got our bagels in just  5 minutes. Same comment as for pica, it’s really fascinating how people can think of so many flavors for one product. I must say, It tasty but I’m more of a pica than bagel person.

First impression is about drinks. How can anybody drink that large amount of Pepsi? Small glass in USA equals large in Europe. And then, the game.

I’ve learned how to play baseball  finally (ok not me, the players :)) Nice to see how real baseball game works with all the clapping, dancing, cheering and quiz time.

Since we are a bit irresponsible, we booked our accommodation in the last moment and couldn’t find 10 days in one place that we liked, so we decided to make something useful out of this situation and  went one night  to Washington, D.C. Luckily we are irresponsible, so we had opportunity to visit DC.

What would tourist do on day 7 in NYC ? Shopping! Can’t say the same thing  for men, but  shopping for women in NYC is the best. So many options, and shoes, so many shoes… Ok, we actually did something else before shopping. Before shopping we rode Roosevelt Island Tramway. 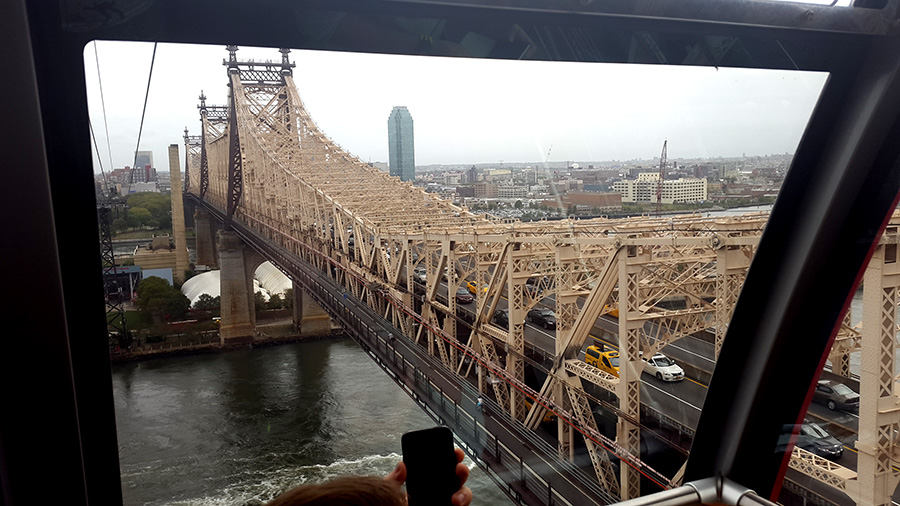 It’s a short ride over the river. After everything I’ve seen these past days, It hasn’t wowed me, but if you are somewhere close by, you should give it a try.

After 9 pm, after 5 hours in Century 21, I was actually all alone in the shopping mall and had to get back all by myself, taking 2 different metro trains with tons of shopping bags in my hands. I know problem was me, but I thought I died of fear 5 times trying to get back to our apartment.

Day 8 we spent half of the day in Brooklyn.  Had some food and more food, but  haven’t seen anything special for me there. I must say walking onto Brooklyn bridge was awesome. 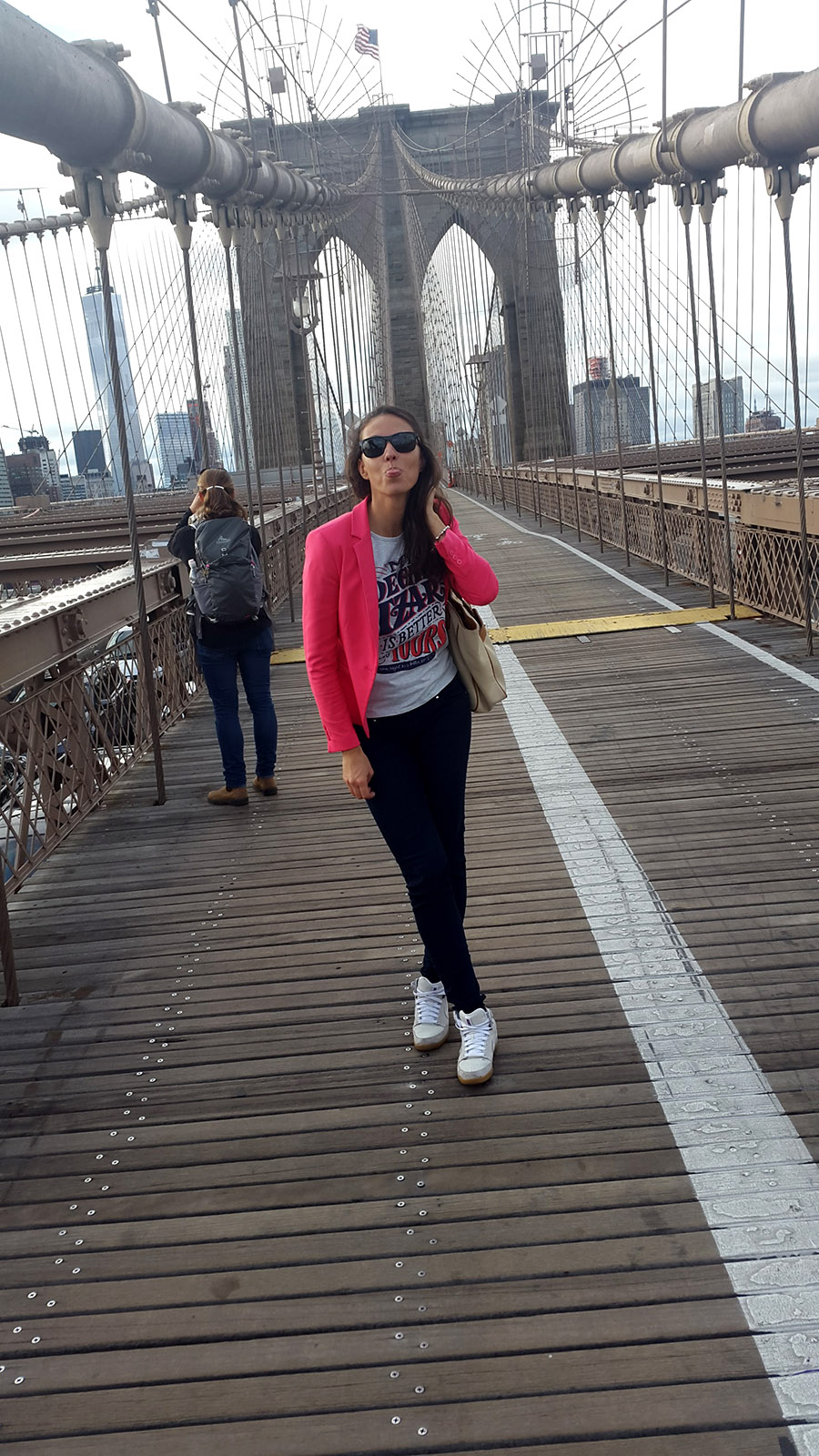 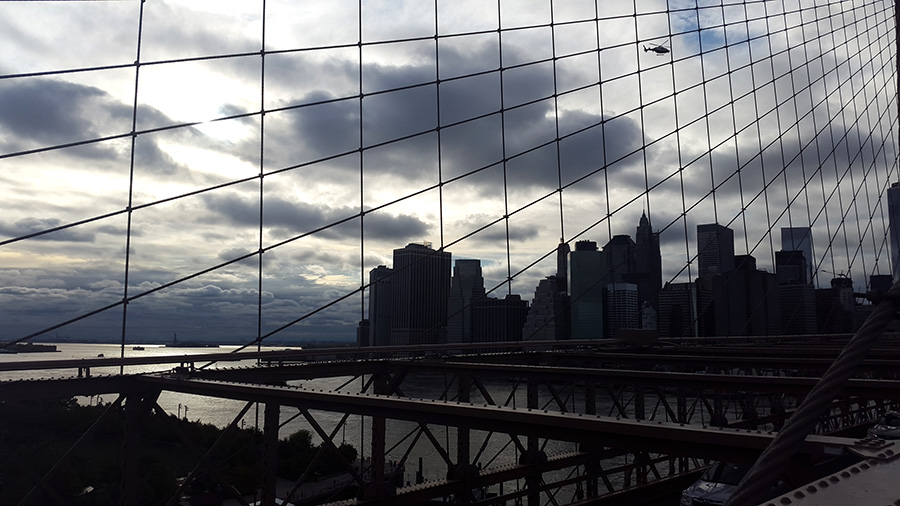 In the evening we tried to find some nice bars around 13th street and found a Spanish bar, watched Flamenco and drank all kinds of Sangria.

On our way home, we went to Phoenix club to have one more drink. We didn’t realize that this was a gay bar. 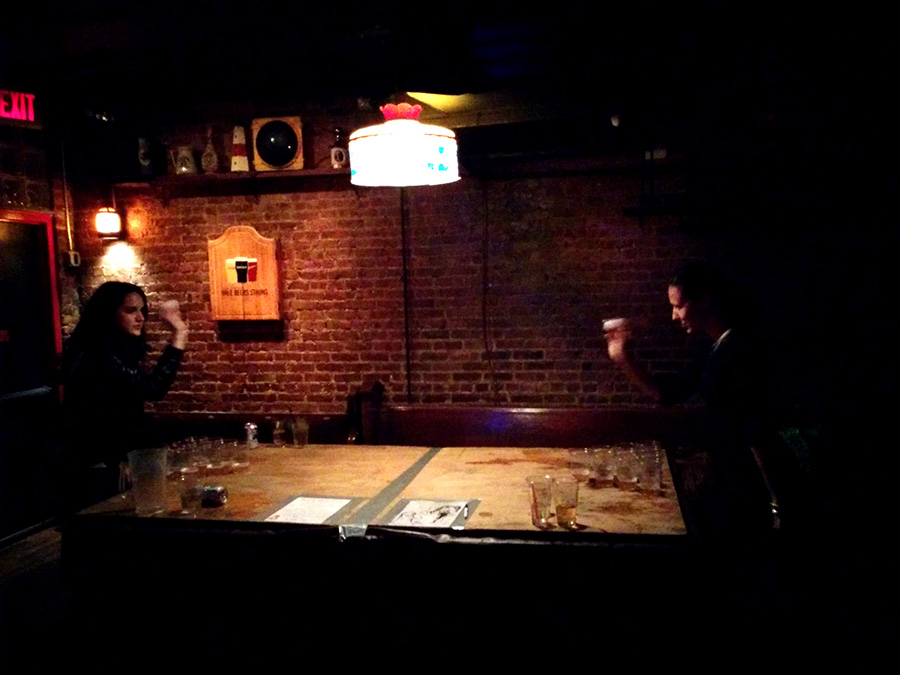 I’ve never been in one but we had really awesome time drinking and playing beer pong. 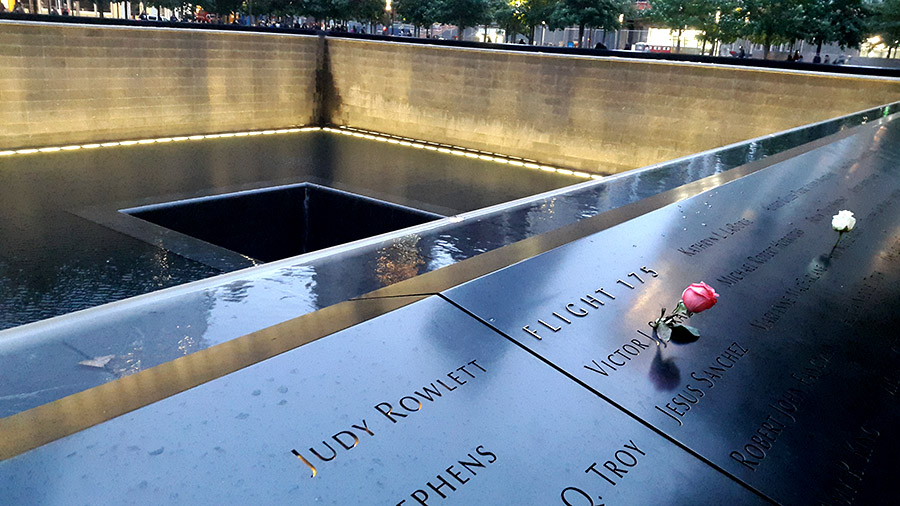 Didn’t really think it will move me, but seeing all those names engraved into stone…

This was actually our last day and tomorrow we were heeded home. Just a little bit of Soho, coffee with a friend, Mediterranean restaurant on 1st avenue and packing…

Those last 3 days we tried not to think much, just: eat, drink end enjoy NYC.  Really amazing city worth your time. I’m really hoping to get back some day.

Manhattan, New York City, NYC, Travel, what to do 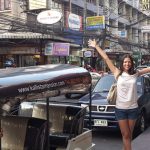 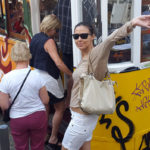 Next Story:
What to do – 4 days in Lisbon