First thing you should know about Tokyo is that Tokyo is the most amazing city in the world!

The second important thing is that Tokyo is not an expensive tourist destination at all. If you are looking for expensive, try visiting Zurich or Sydney 🙂

Third thing would probably be lack of English language. Almost everything is written in Japanese and if you are lucky, you will come across someone who understand a bit of English. For example, which one will you use to wash your hands?

I went with the green one, It looked less dangerous 🙂

But you really wouldn’t mind any of these because Japanese people are very friendly and polite.

Sounds crazy, but using toilet in Tokyo is like going 100 years into the future.

Some of the features are:

Use can be challenging because every toilet looks a bit different and has different icons and features.

I’m lucky that I came across this info before traveling to Tokyo, so I wasn’t so freaked out at the airport and at least I knew how to flush.

The easiest way to communicate with cab driver is to show them the destination on a printed map or on your phone. Tokyo taxis are usually older models of Mercedes Benz. It looks amassing with drivers wearing caps and white gloves, and seats with crochet covers. This is not all, doors are opened and closed automatically by driver 🙂

Do not tip! In USA it is a must, but in Japan it is considered rude to tip.

Where to stay in Tokyo?

When I look for accommodation, I always search for a city center or somewhere near. In Tokyo this was not the case. I was like: What the hell, where is the city center?

Believe it or not, Tokyo has got more than one city center. Each part of Tokyo is its own city, and has a city center. I’m not talking about some small city centers, but huge & flashy. This is the reason why 5 days in Tokyo just isn’t enough. We had booked a hotel for the first 3 nights in Shinjuku.

The main reason we stayed here are great choices of accommodation and its connection with metro lines (consider buying Suica metro card). Its crowded and flashy as the other parts are, but I got the impression that Shinjuku is more fun for younger people. Now, after visiting Tokyo, we would probably choose Shibuya city or Roppongi district in Minato city.

The other 2 nights, we had spent in Ginza district in Chuo city. It has the most “city center” look.

Wherever you decide to stay, you should come and visit Ginza district. With its wide streets, high end boutiques and nice restaurants and bars, I experienced it as the most luxurious part of Tokyo.

What to eat and drink in Tokyo?

I liked the food in Tokyo so much, so the food will be the first thing to talk about.

Barbecue – cook your own

Tokyo has awesome restaurants where I tried the best beef in the world. Possibility to play and cook your own food was a plus. Look at that happy face. Like a child in a playground 🙂

Don’t forget to eat sushi in Japan. Taste is way better than sushi back in Europe or the USA.

If you like alcohol and never tried hot Sake, you should definitely try it in Tokyo. It’s Japan’s famous drink. It’s served like this:

It’s so so good. I drank only hot sake the whole stay in Tokyo. If you had watched the Avengers you may noticed that Tony Stark drank hot sake.

And of course, Ramen, Japan’s famous dish. It’s a kind of soup with noodles and meat. It’s usually pork, but it can be fish based.

You can try to order soup in vending machine restaurants. You don’t get instant soup of course, you just order outside, get a ticket, and then go inside, give a waiter the ticket.

It was too much for us, so we ended up going to a “real” restaurant.

If you want to try something crazy, try eating blowfish. Blowfish is poisonous, yet it is considered a luxurious food in Japan. It cannot be enjoyed everywhere, it has to be prepared by an experienced chef.

And of course we did it. Didn’t like the taste of it at all, it tasted like paper. But if we’re going to die, lets die together, so I had to try 🙂

If you are more a fan of barbecue, you should try Yakitori. It’s all kinds of chicken on a stick. Uses all parts of the chicken. Sometimes you get a menu only in Japanese, so you just point to something. It’s like a food lottery. But still, I ate everything I got 🙂

What to do in Tokyo?

Beside wandering our neighborhood, and trying different foods and drinks, we had our Tokyo to do list.

First of all we wanted to see Shibuya crossing – the worlds craziest road crossing. Approximately 2,500 pedestrians cross at a same time.

We have found a Starbucks with a view onto this crossroad, so we sat there, drank our coffee and stared until we finished the coffee.

Next to the Shibuya crossing (55m away), there is the Hachicko memorial statue. It’s an unofficial landmark but has an interesting story behind. I have to be honest, if it wasn’t so close, we would probably skip it.

Shibuya is a very lively and shiny part of the Tokyo, so it’s a great experience just to wander around.

On my to do list, there was Takeshita street – pedestrian street full with boutiques, cafes and restaurants.

I didn’t find myself buying any clothes (younger people will appreciate this more), but I ended up eating crepes. Omg, I’m talking about food again!

Interesting thing here in Tokyo is that you can find all kinds of food displayed in shop windows. Don’t know how they make this, is it plastic or something similar,  but it looks so real and yummy. I have to say, awesome way to make you buy food 🙂

Not that far from Shibuya, placed in Minato, there is the Tokyo Tower where you can enjoy beautiful view of Tokyo. We came at night cause we wanted to see flashy Tokyo in nigh mode (also we stayed up very late every night, and usually slept the entire afternoon).

Didn’t google that much before going to the tower, so I didn’t know its design was based on the Eiffel Tower. I was like “Whaaat, are we in Paris?”

The view is beautiful. Don’t know if I am the right person to judge this, cause I just love towers/observation desks everywhere 🙂

You cannot visit Tokyo, and not visit Sensoji Temple – Buddhist temple. It’s Tokyo’s oldest and the most popular temple.

Outer gate of the temple is called  Kaminarimon (Thunder Gate) and is the symbol of Asacusa and the city of Tokyo.

There’s also a shopping street that leads from the outer gate to the temple’s second gate. This is the perfect place to by some souvenirs.

Restaurant street under the railway tracks between Yurakucho and Shinbashi stations. If you want to get away from the standard Japanese restaurants, this is the right place to be. It’s probably not the cleanest place, but the atmosphere and food is really great. If we had a place like this at home, I would probably avoid it. But hey, its Tokyo… And I’ve read great reviews about it.

Here we tried the famous Yakitori (chicken on sticks) and drank hot sake. It was worth the hassle. You should really check out this unordinary place.

Another unordinary place in Tokyo is Golden Gai. It’s part of Shinjuku with narrow streets, filled with small bars. When I say small I mean really small, like one bar can fit only 5 or 6 people at the time.

Don’t know why but didn’t take any picture of it. Maybe because there is really noting to have a picture of… From the outside you could see just night and the walls, and from the inside, it’s so small, I could fit just somebody’s head in the camera 🙂

It looks a bit shady at night, but we had a great time drinking cocktails and the best Japanese whiskeys. The bartender was really cool, shaped an ice cube into a diamond in front of us for our every drink. Chatting with a nice Australian couple was a plus.

If you are looking for place for a night out, this is the right place for you. Filled with bars, restaurants, clubs… Where ever you go, you can’t miss. We ended up in Hard Rock cafe (I know, It has nothing to do with Tokyo, but I just love it there), and some other random pubs and had a great time.

We didn’t mind the cold weather and the rain. Hot sake got us covered.

It’s a really great fish market where you can see, buy and eat all kinds of fish and sea food. For me, it was more to see, than to eat.

But there was certainly something for me to try too.

Outside, on the street, there are all kinds of stuff for sale. I say stuff cause I don’t know what half of it is.

But I ate some delicious strawberry cake. And there is me, talking about food again.

We thought that we saw a lot of Tokyo, but at the end, when a cab driver was driving to the station, we saw that there are so many places that we had missed. This is the only big city where I had that kind of feeling. We will get back to Tokyo some day and experience more.

For example, we will go to a Sumo wrestling match, do Go-kart experience, eat more sushi and drink more hot sake for sure! 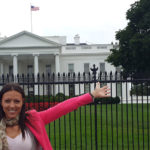 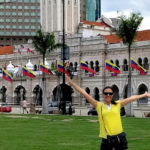