One week in Sydney – What to do?

You would think spending a week in Sydney is more than enough, but for me it was barely enough. Jet lag hit us so hard that we couldn’t get up before 5 pm. Last 2 days we succeeded to get up at 10 am (yeey 🙂 Luckily for me I still managed to see everything I wanted.

What we didn’t know that most of the stores / shopping malls are closed after 5:30 pm and it’s not that crowded at night. It’s a bummer if you wake up at 5 pm 🙂

The second thing that really surprised me is that November in Sydney is not as hot as I thought. Of course people were wearing flip flops and shorts, but I was so cold all the time, especially at night. I would really have worn a winter jacket at night if I had one 😀

Wondering around the opera we came across the Opera bar, a nice bar terrace with a great view of the ocean. Great place for drinks.

Unfortunately, wondering around, we also found out that tours through the Opera weren’t possible for the time we were in Sydney, but we came back tomorrow and bought ourselves tickets to the ballet show. The tickets were very expensive but we loved every second there.

Yes, the photographer could do a better job, but we didn’t want to look so touristy, so this was a quick one. But when we got outside I got more and more photos of the Opera and me 🙂

Before I talk about something else (I will for real :)) let me tell you a short story about this masterpiece…
It was designed by a Danish architect Jørn Utzon who won an international competition for designing this building in 1957. The building was finished and officially opened in 1973. Now it presents more than 2000 shows a year for more than 1.5 million people.

This neighborhood is really worth visiting. It’s all about fun, fun, fun.

You can enjoy a beautiful view, watch an interesting street shows, ride the wheel, get a drink or a nice meal.  You can even eat a crocodile or a kangaroo dish.

We decided to enjoy the entire evening here.

If you are a fan of high views you shouldn’t miss visiting the Sydney Tower Eye. It’s the highest point in Sydney. It takes you 268 m above ground and gives you a 360 degree view of the city.

And if you search for something with more adrenaline, you can always do a sky walk. Yes this really exists, it’s a tour walking outside the tower 🙂

Btw. This tower is on top of the Westfield shopping mall.

Here I bought for myself high heel shoes which were so expensive, and I wore them only once. I don’t think I will ever again, but I just had to by something nice for myself from Sydney 🙂

If you want to get away from the city you can get to Manly beach by a 30 minute ferry ride. If you think it’s a long ride, think again. The ferry passes next to the Sydney Harbor bridge and the Opera, so it’s like an ocean sightseeing tour. And you know what else? You can take more pictures of the Sydney Opera House 😀

Manly beach is known for its gold sand and stunning sunsets. I did wear a swimsuit, but we ended up, not on the sand, but having diner in a great restaurant at the beach watching the sunset. Really great experience.

This neighborhood is actually a major transport hub, but also, you can find here many street entertainers, lots of restaurants etc. And of course, there is a beautiful view of the ocean.

We had a lunch here, but I have to say it wasn’t a good decision. It was very expensive and we stayed hungry after a tiny meal 😀

You can admire it from the ocean…

Or you can cross it by car or by foot…

Or you can climb the Pylons for a small fee and get an amazing view from above.

Or you can literally climb the bridge (see those tiny blue people on the photo). If this sounds awesome for you, let me just say, it’s very expensive.

And guess what? You can see the Sydney Opera House from above as well 😀

I will never get bored of this 🙂

Btw. On the bridge photo above is my friend Pete whom I met in Stockholm years ago. So I actually had a local tour guy for a day.

For example I found out that the bridge has a suicide prevention barrier because of lot of suicides that happened there. I saw this barrier first time in my life and I have to say that I’m really surprised to see something like this in such a beautiful city. I would kill for waking up every day with a ocean view (not literally of course :))

This beautiful 1 km long beach is located 7 km out of Sydney.

It’s a nice place to hang out all day on the sand, and a lot of people did that. Since I needed like 10 degrees more to do that, I ended up having breakfast in a cafe next to the beach and enjoyed the view.

Story of Harry’s goes back to 1930s. It’s famous for its tiger pie – pie with peas. Also, you can find a lot of celebrity pictures eating at Harry’s. I was happy to find my favorite actor Julian McMahon ate here 🙂

Btw. My friend Pete said I had to try the pie, so I had to 🙂 Never ate something like this. Interesting taste I must say.

p.s. Don’t feed the seagulls. I’ve discovered this on my own 🙂 First there were few of them, but suddenly there were hundreds of them attacking me for a bite of the pie. At the end I gave them half of the pie, just to leave me alone 🙂

I didn’t google anything about this topic, so I was very surprised to find out about Sydney lockout laws. Apparently a lot of alcohol-fuelled violence in Sydney made them introduce these measures.

First of all if you go to the club, you can only get drinks in a plastic glass (which I personally dislike). Also, they don’t serve straight alcohol, so if you want to get whiskey, you can’t. You can only get whiskey mixed with something (like Coke). It made me feel like I’m in some high school party 😀

Secondly, last drink is at 3 am… Another interesting fact about working hours: If you don’t enter the club till 1:30 am, they won’t let you enter. We learned this the hard way. We wanted to change the club at 1 am, but at the time we got to the other club, we couldn’t enter. And when you have that jet lag and can’t fall asleep before 5, you can only spend your time looking at the ceiling… 🙂

This catholic cathedral is the longest one in Australia. It was rebuilt many times, but the foundation stone was laid in 1821. Unlike most cathedrals which are oriented east to west, it’s oriented north to south.

Don’t miss seeing the cathedral from the inside. It’s really stunning.

Outside the cathedral I stumbled upon these birds with long black beak. I’ve never seen them before. I googled and found out it’s called Australian white ibis.

Interesting to see them wondering around freely like pigeons 🙂

I couldn’t leave Australia without seeing a kangaroo in person.

Our first choice was Featherdale wildlife park, where you can feed and pet animals. But since it is outside Sydney (more than an hour drive) we decided it was too much of a hassle, so we went with the second choice, the Toronga zoo.

Here we found out there is actually an animal called wallaby. It looks like a kangaroo, just a bit smaller.

We are not fans of the zoo, so we literally just ran through it. Don’t think anybody else does that. But we went just to see the koala, the kangaroo and the Tasmanian devil. Its huge, but I don’t think we had spent there more than a half an hour 🙂

To get to the zoo we needed to use the ferry… And guess what? ferryis next to the Sydney Opera House 🙂

And yes, I got myself another picture 🙂

Sydney is a great place for a visit, but I must say, after visiting 34 countries, after Zurich, it’s the most expensive city.

And yes it is so far away, but I’m glad I had an opportunity to add Sydney to the list of countries I’ve visited.

Previous Story:
Rome in May – What to see in three... 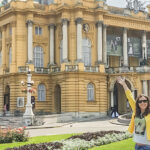 Next Story:
2 days in Zagreb, Croatia